Harvest festival in Primary School always has strong memories for me as both a pupil and member of staff. People still donate random tins of food perilously close to their best by date that the poor old dear wouldn’t have a clue about using (even I would struggle to make something tasty with tinned sprouts). The usual hymns of Who Put the Colours in the Rainbow are still sung with gumption including my personal favourite Paintbox and the new addition of Harvest Rock & Roll that usually includes the kids bopping along with actions.

‘Cauliflowers fluffy & cabbages green, strawberries sweeter than any I’ve seen, beetroot purple and onions white, all grow steadily day and night. The apples are ripe, and the plums are red, broadbeans and sleeping in their blankety beds’ – Paint Box

An important part of Harvest Festival is not necessarily its religious links for some people, but celebrating a bountiful harvest. It reminds us to be thankful and to share food with the less fortunate. Of course big theme of harvest often revolves around bread, the food of life. A tradition in many churches and schools is for bread to be made representing a sheaf of wheat and often features (for a reason I’m yet to understand apart from quaintness) a little bread harvest mouse with eyes made of cloves or currants.

As I teach cookery in a school I wanted to make a harvest sheaf for the pupils to take to chapel for their Harvest Celebrations on Friday, but had no experience of making one. To make something like this you need to use a decorative dough. A traditional bread dough won’t work due to the speed at which it rises. This took me 2.5 to make before baking. Imagine what normal bread dough would be like after 2.5 hours? Impossible to work with!  The salt to yeast ratio is quite high as the salt used to stop the yeast from working too fast and making the dough unworkable. Yet again twitter came to the rescue with a recipe. @sgratch recommended using the Hamelman’s Light Yeasted Decorative Dough recipe and advised what proportions of dough would work. He had only made a harvest sheaf a few days before hand.

I did toy with the idea of using plain flour rather than strong bread flour as I wouldn’t want the dough to ping back too much, however you also want to the dough to be stretchy so you can roll it in into thin shapes. You need a high gluten content for this to happen, and you get this by using strong bread flour. I’m not sure how easy it would be to make with wholemeal flour. This was one of the few times I was glad my kitchen was cold! 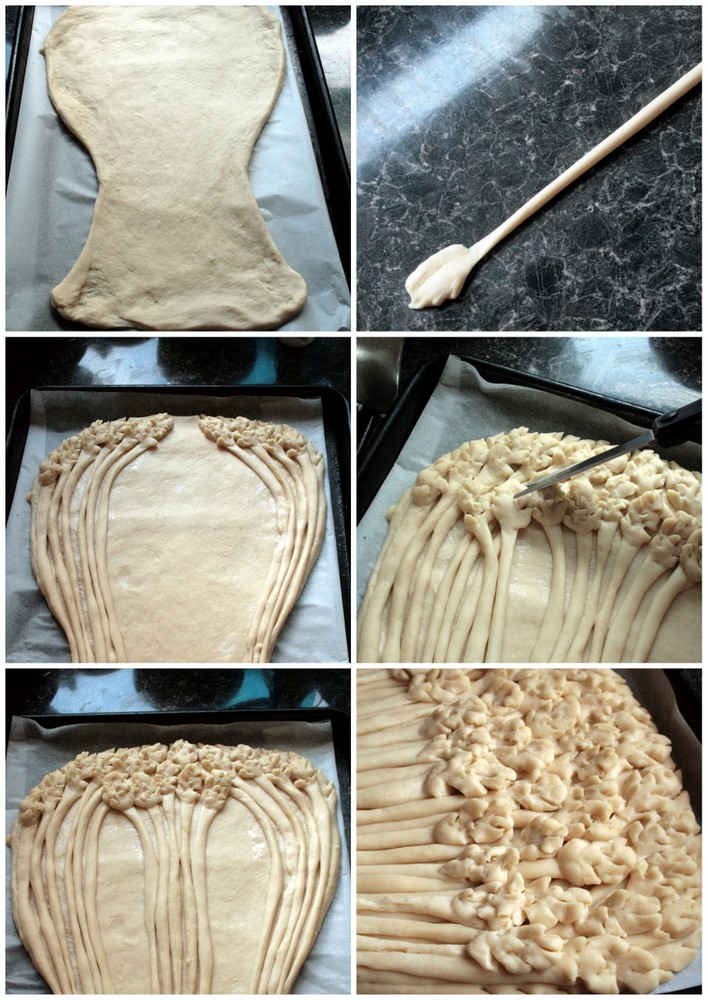 The key is to work on a small bit at a time. Keep the rest of the dough in the fridge to inhibit rising before you need to use it. The sheaf took me 2.5 hours to construct before being baked so it’s certainly not a quick last-minute thing to make for Harvest service. I hope to make it again next year, maybe with a class of pupils.

What memories of Harvest Festival do you have?

Harvest Festival Sheaf
Based on recipe from Bread, A Baker’s Book of Techniques and Recipes, by Jeffrey Hamelman
Makes 30cm tall sheaf

1) Mix together all the dry ingredients then add the softened butter and water until combined to form a dough.

2) Knead dough for 10 minutes until soft. Use the dough immediately.

3) Take the 400g of base dough and put the remaining dough in a covered bowl back in the fridge to keep cool.

4) Grease an appropriate baking tray or line with baking parchment. Shape the dough into a rough sheaf shape and place on the baking tray.

5) Start to build up the wheat one stalk at a time. To make the wheat, roll 10g of dough until approximately 30cm long then fold the end over 4 times and squash to make a giant tadpole shape. Stick to the base with water then use scissors to make snips in the head.

6) Continue to add the stalks until all the wheat stalk dough has been used up. Make the braid and attach to the sheaf with water.

7) To make the mouse roll a small amount of dough to make a tail then roll the remaining dough into an egg shape. Exaggerate the nose (so it almost looks like a shrew) because once in the oven the nose will shrink. Attach to disks of dough to the side of the head to make the ears. Stick the mouse to the sheaf then add the eyes using cloves or currants.

8 ) Whisk together an egg, tbsp of water and pinch of salt, then glaze the dough.

9) Bake at 160oc until dough is golden and dried out. After and hour of baking slide the sheaf off the sheet directly on to the oven shelf to help bake the underneath. In my case this total baking took nearly 2 hours. If the top is browning too quickly cover with foil. 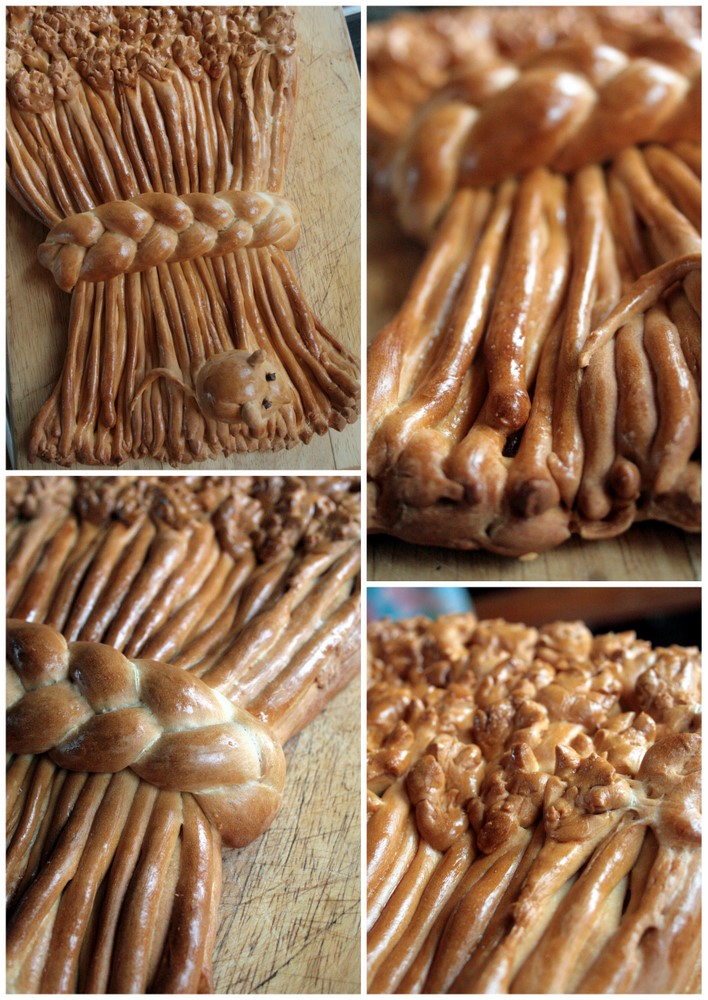